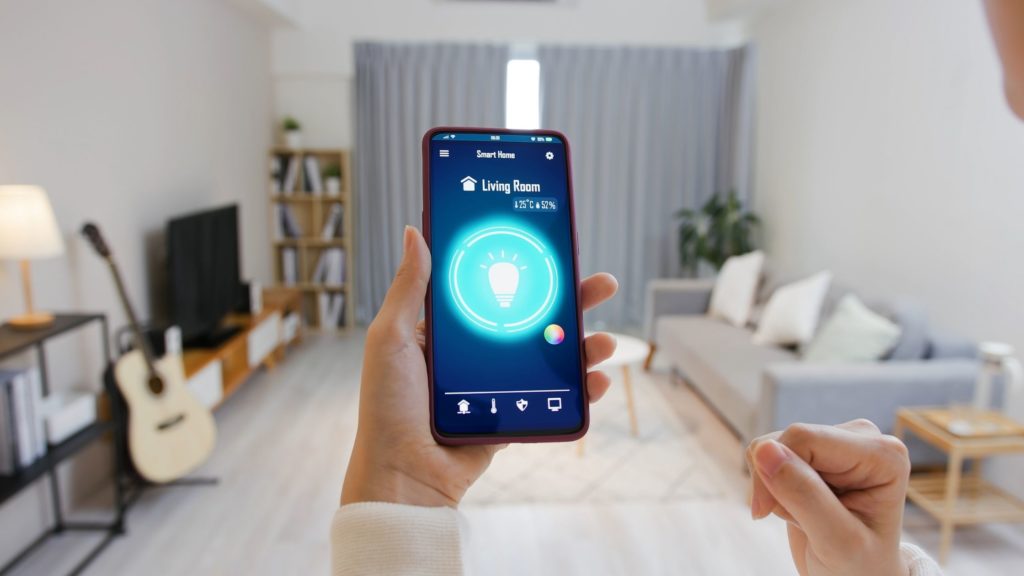 We bring to you a $1,000 smart home shopping list for beginners. Setting up a smart home does not have to break the bank. Here’s our guide on building a low-cost space-age dwelling for around a thousand dollars.

This is the “brain” of your smart home network, from which you may control the linked smart gadgets. The Google Nest Audio is the next-generation replacement for Google Home, serving as both a Google Assistant and a portable speaker. This gadget can recognize Google Assistant voice commands that begin with ‘Ok Google’ or ‘Hey Google,’ and perform the desired activities on connected devices. You can, for example, tell it, “Hey Google, turn the lights blue,” and the smart lights will change colour.

Google Nest Audio is notable for being loud and punchy, which gives a better listening experience than the smaller Google Nest Mini, which is roughly the size and shape of a hockey puck. As a result, Google Nest Audio is an affordable 2-in-1 device for novices, serving as both the Google Assistant platform and a respectable speaker for in-home listening. If you want higher music fidelity or already have a favourite Bluetooth speaker, you can pair it with your Google Assistant device and add it to your smart home network.

For the time being, this is the closest we can get to living in an episode of The Jetsons, but if you connect a robot vacuum cleaner to your smart home network, you can leave to work knowing that there’s a little helper toiling away at home to keep your floor clean.

The Alfawise V10 Max Robot Vacuum Cleaner has both vacuum and mopping functions, as well as an integrated water talk. It has a typical operating time of roughly 2 hours, giving it plenty of range for small and average-sized households. It also works with Google Assistant, so you can use voice commands to have the robot clean up spills.

A video doorbell adds an added layer of security to your house by allowing you to see and speak with people who arrive at your door. These gadgets often contain video recording capabilities that give surveillance data. While there are numerous without a doubt outstanding brands and options for video doorbells available, they can also be unreasonably pricey. Google’s Nest Hello video doorbell with facial recognition, for example, costs up to $500 per unit.

Instead, choose for a less expensive alternative that performs comparable duties, such as the Smart WiFi Video Doorbell. Once set up, its native software allows you to watch and chat with visitors at your door using your phone, tablet, or computer. The smart doorbell also has motion detection and video and image recording capabilities.

The number of smart lights and lamps on the market is mind-boggling, with some requiring their own hub and system to function. So-called starter packages may also include only a few bulbs, forcing you to spend additional money on extras. It may all add up quickly, especially if you’re a beginner. Fortunately, Yeelight (by Xiaomi) has a smart LED light bulb that is not only simple to operate but also reasonably priced. These smart lights are among the simplest to set up, costing only $25 per bulb. Simply plug them into a light socket and connect them to your smart home network.

After that, you can use your voice or the Google Assistant app to turn them on and off, change their colours, and even dim or brighten them as desired. You can even configure them to change colours and brightness automatically as part of a scenario.

You most likely already have a television with an HDMI port. With Google Chromecast, a little dongle that plugs into your HDMI connection, you can integrate your television into your smart home network via Google Assistant. After you’ve completed the setup, you can say, “Hey Google, play Record of Youth on Netflix,” and your television will begin streaming the Korean drama immediately. Chromecast can also be used to project the screen of your smartphone, tablet, or laptop onto your television.

You’ll never have to worry about forgetting your keys again with keypad entry. Furthermore, the keyless operation of this smart lock eliminates the possibility of being lock-picked and eliminates the need to change locks due to lost keys. You can lock or unlock your door with a voice command because it is compatible with Google Assistant. Already in bed or out of the house and need to check your door? Simply pull out your phone to do so. You can also set up to 25 additional keycodes for usage by relatives, neighbours, friends, and other authorized individuals with the Yale Assure.

Save Money with Smart Homes | Budget Your Smart Home in Singapore